The three French verb constructions which include some form of être plus a past participle usually require grammatical agreement of the past participle with the subject.

Verbs of perception are subject to grammatical agreement in the compound tenses, but the rules are somewhat tricky - they only agree with their subjects when they precede the verb. 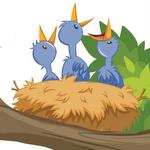 The French definite articles (le, la, l', les) indicate either a particular noun or, contrarily, the general sense of a noun. They're used similarly to their English counterpart "the," but there are many instances where a definite article is required in French but not English.

Demonstrative adjectives (this, that) are used to indicate a specific noun or nouns. In French, they must agree with the noun(s) in number and sometimes gender: ce, cette, cet, ces.

What is écriture inclusive and why does it matter? Learn about "inclusive writing" in this animated video with interactive subtitles.

How are you feeling? Find out how to ask and answer this question in French.