Learn how to greet people in French, at any time of day or night.

Halloween is not a French holiday, though each passing year sees a few more bits and pieces of it imported to France. Nevertheless, learning the French translations for Halloween vocabulary can be fun, especially for younger students. 'Appy 'Alloween! :-)

Home is where the heart is - not to mention the refrigerator, computer, and bed. Learn French vocabulary related to your home and furniture.

It's imperative to understand the imperative mood if you want to give orders, make requests, express desires, provide recommendations, offer advice, and prohibit actions.

They say practice makes perfect, so how can one of the most common French past tenses be imperfect? In grammatical terms, "perfect" means "complete," so the imperfect tense is used to describe an incomplete or ongoing action or state of being.

Teachers, find hundreds of French lesson plans, worksheets, and activities on a variety of topics, from vocabulary to culture.

Mardi Gras is an annual celebration of extravagance and (over)indulgence before Lent. Because Mardi Gras, literally "Fat Tuesday," is tied to Easter, the date changes every year.

Learn the French numbers and how to count from 0 to 59 in French.

The partitive article (du, de la, de l', des) refers to an unspecified quantity of food, liquid, or some other uncountable noun. English has no equivalent article - the partitive is usually translated by the adjectives "some" or "any," or may be left out entirely.

The passé composé is the most important French past tense, and just to make things interesting, it has three possible English equivalents.

The trickiest aspect of the two most important French past tenses is that they often work together, juxtaposed not only throughout stories, but even within individual sentences. Understanding the contrasting relationship between the passé composé and imparfait is essential to communicating in French.

Prepositions are short but essential words which are placed after a verb, noun, or adjective in order to indicate a relationship between that word and the noun or pronoun that follows.

The French present tense, also known as the present indicative, is fairly similar to the English simple present, but there are some key differences.

Reflexive pronouns reiterate the subject, which may seem redundant, but in fact serves an important purpose: it indicates that the subject of the verb is performing that action on itself. 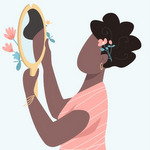 For reflexive verbs, the reflexive pronoun indicates that the subject of the verb is performing the action on him/her/itself, rather than on someone or something else. The majority of reflexive verbs have to do with one's body, clothing, or relationships.