They say practice makes perfect, so how can one of the most common French past tenses be imperfect? In grammatical terms, "perfect" means "complete," so the French imperfect tense is used to describe an incomplete or ongoing action or state of being.

The imparfait is usually equivalent to "was" or "was ___-ing" in English (past progressive) and is used for all of the following:

2) Habitual actions or states of being

There’s an odd quirk in English with regard to the word “would.” In the "Last year …" example just above, we can use "would" to refer to this habitual action in the past: "we would go to the movies" is perfectly correct and grammatical. In French, this example requires the imperfect. In contrast, when we use “would” for something that could or might happen in the future (I would leave if I were you), French requires the conditional mood. So when you see the word "would" in English, it’s vital to know whether you’re talking about the past or the future in order to choose the correct French verb form. Pro tip: if you can replace "would" with "used to," you need the imperfect.

3) Actions or states of being with unspecified endings

6) Most verbs followed by the infinitive

The imperfect is often used with si, in which case it’s not a past tense. Instead, it expresses something that is unknown or unreal in the present or future.

* I know this sounds like it’s in the past, but at the time, it wasn’t. She wanted to know if I was married in the present tense of her asking.    The French imperfect is often used alongside the passé composé, which can be very confusing for French students – learn more.

Think you’ve got it? Test yourself on the French imperfect with these fill-in-the-blanks exercises 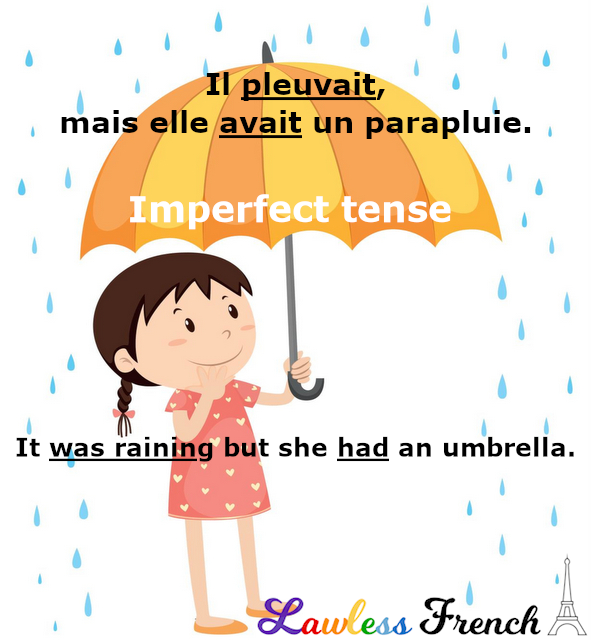