Consonants are sounds created by blocking or hindering the passage of air through the mouth in some way. Compare [p], for which you briefly close your lips before forcing the air through, to [a], for which your mouth remains open.

Like vowels, consonants aren’t necessarily individual letters, but one or more letters that produce a single sound, such as "ch."

Characteristics of a consonant sound

Too technical? Try this lesson instead: Consonants for beginners.

There are three different ways to categorize French consonant sounds:

Many consonants have voiced/unvoiced equivalents, meaning that the sounds are pronounced in the same place in the mouth (see section 3, below); the only difference is whether the vocal cords vibrate.*

These voiced/unvoiced pairs are important with regard to liaisons, enchaînement, and assimilation.

* Place your hand on your neck and make the sounds "b" and "p" (just the consonant sound, not the name of the letter). You should feel your vocal cords vibrate when you say "b" but not when you say "p." Do the same thing with other pairs and you’ll feel how similar they are, with just the vibration or lack thereof making the distinction.

*The equivalent English sounds are alveolar. 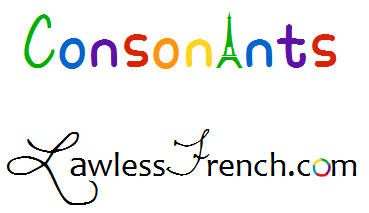