It’s very common to have two verbs in a row in both English and French.

It gets more complicated when additional grammatical structures are introduced, like

Including when the semi-auxiliary verb requires a preposition.

But sometimes the object pronoun is modifying the conjugated semi-auxiliary verb, in which case the pronoun has to precede that verb.

Reflexive pronouns (me, te, se …) have to stay in front of the reflexive verb, which is almost always the infinitive.

When there’s a reflexive pronoun and an adverbial or object pronoun, the Double pronoun order rules again come into play.

When the sentence is negative, ne directly precedes the conjugated verb** and the second part of the negation (pas, plus, jamais …) directly follows it.

** The only exception is when a reflexive or object pronoun precedes the semi-auxiliary – in that case, ne precedes the pronoun.

With compound tenses/moods (like the passé composé), the word order is considerably less complicated: 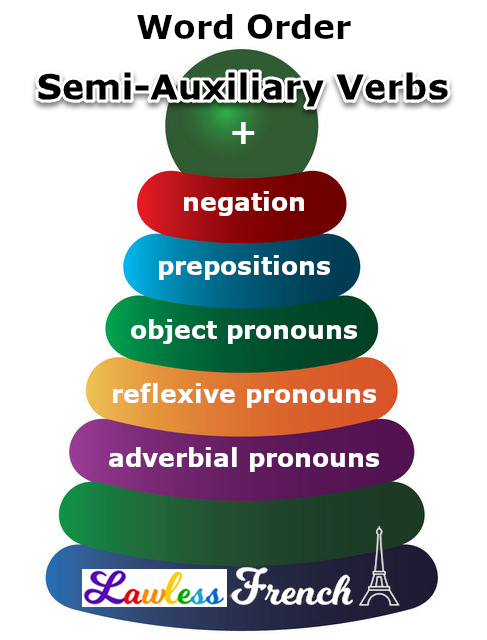