Sometimes one pronoun just isn’t enough. A sentence might need both a direct and indirect object, or a reflexive pronoun as well as an adverbial. When this happens, word order becomes an issue: how do you know which pronoun to place first? It’s actually pretty easy, once you learn the rules.

Be sure you fully understand how to use each type of pronoun before continuing with this lesson.

As you know, object, reflexive, and adverbial pronouns precede the verbs they modify in every tense and mood—except the affirmative imperative, when they follow it (learn more). When a verb has double pronouns, they still precede or follow, but the order of the two pronouns themselves also varies.

In the vast majority of verb tenses and moods, the pronouns precede the verb and must be placed in this order:

Two pronouns is the limit. The French won’t say something like Je le lui y ai donné to mean "I gave it to him there"; instead, they’ll reword the sentence to remove one of the pronouns.

In the affirmative imperative, pronouns follow the verb and are connected to it and to one another with hyphens, in this order: direct + indirect + y / en.

Remember that moi and toi are stressed forms that can only be used when at the end of the command. When they precede y or en, they revert back to me and te and are therefore obliged to contract to m’ and t’. 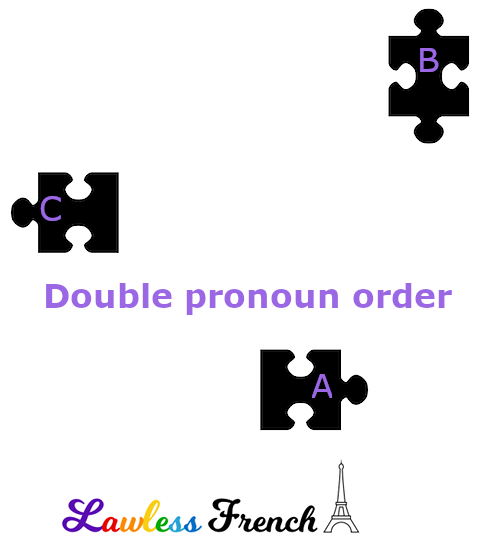