Who, what, which one? Use interrogative pronouns to ask these questions, which are a little more complicated in French than in English.

When it comes to interrogative pronouns,* qui means "who" or "whom" and que means "what."

When "who" is the subject of the question, you can translate it by either qui or, less commonly, qui est-ce qui, plus a verb in the third person singular.

As the direct object of a question, "whom" is translated by either qui est-ce que or qui + inversion.

Likewise when "whom" is the object of a preposition:

When "what" is the subject of the question, it is equivalent to qu’est-ce qui plus a verb in the third person singular.

Inversion is rare, and requires the addition of the neuter subject pronoun il.

As the object of a question, "what" is translated by either qu’est-ce que or que + inversion.

When "what" is the object of a preposition, the French equivalent is quoi + est-ce que or inversion.

As summarized in the above table, there are four possible combinations when asking questions without inversion. Just remember that the first word (the interrogative pronoun) determines whether you’re asking who (qui) or what (que), and the last word (which is a relative pronoun) determines whether the interrogative is a subject (qui) or object (que).

* This is not always the case for qui and que as relative pronouns.

The third interrogative pronoun is lequel.

Interrogative pronouns can also be used in indirect questions.

Think you’ve got it? Test yourself on the difference between qui and que with this fill-in-the-blank exercise: Une petite sœur très curieuse 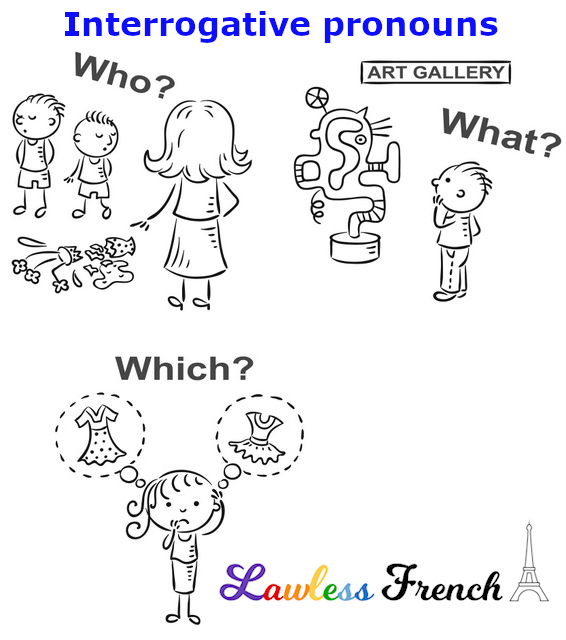