Usage notes: Est-ce que is unique among French expressions in that it doesn’t actually mean anything – it’s just a way of turning a statement into a question, kind of like the word "do" in English. The difference is that the word order changes when asking a question with "do," whereas in French, it stays exactly the same, with est-ce que placed directly in front of the statement.

Est-ce que is the inversion of c’est que, literally, “it is that.” Hence the hyphen between est and ce: c’est = ce + est is inverted to est-ce.

Though est-ce que is widespread in spoken French, it’s much less common in writing because it’s slightly informal. Remember that if you’re in a formal situation, you should avoid it in favor of inversion.

As always, que contracts to qu’ when it precedes a word that begins with a vowel.

So far, these have all been yes/no questions. WH questions (which ask for information like “who” and “how”) are a bit different: they need an interrogatory pronoun, adverb, or adjective before est-ce que: 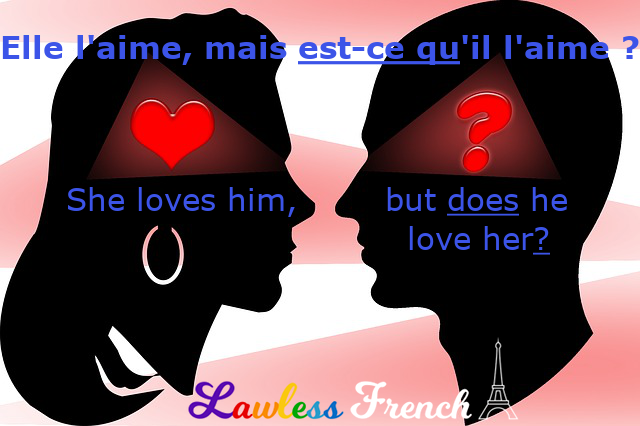