French and English have five different types of numbers used for different purposes and with varying functions: they act like adjectives and / or nouns.

There are strict rules about the placement of the different types of numbers.

1. Cardinal numbers as adjectives must come first, before the noun they modify as well as any other adjectives.

Note the difference between French and English word order when cardinals and ordinals are used together, as in the second example.

2, 3. Ordinals and multiplicatives as adjectives typically precede the noun they modify.

4a. The fraction demi often acts as an adjective and creates a compound noun with the noun it modifies:

4b, 5. All other fractions and all approximate numbers are used as expressions of quantity in this construction:

Unlike most French adjectives, numerical adjectives are often invariable.

1. Cardinal numbers are invariable – except un:

2. Ordinal numbers are also invariable with the exception of premier.

3. Multiplicatives all agree with their nouns.

4a. When demi creates a compound noun, it’s an invariable adjective:

However, when demi follows the noun, it’s a noun and must agree: 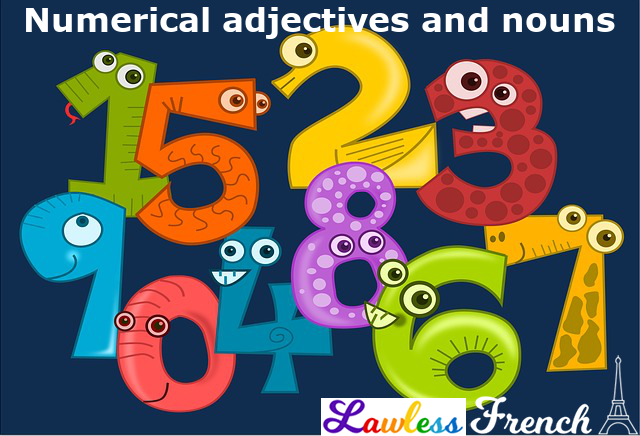