In both French and English, there’s a lot of overlap between fractions and ordinals: the vast majority of these two types of numbers share the same word. In English, they are identical from "third" on up, while in French they’re the same starting with cinquième.

Other than demi, tiers, and quart, all French fractions are based on their corresponding cardinal numbers:

When the cardinal number ends in -e, that letter is dropped before the fraction ending:

Two other numbers require minor spelling corrections in their fractions:

Of course, those corrections are also required in un dix-neuvième, un vingt-cinquième, etc.

Demi can be feminine when used as a noun or when it follows a noun.

But when demi precedes a noun, it always stays in the masculine form.

All other French fractions are always masculine and must be preceded by a number.

And if they’re followed by a noun, the preposition de is needed as a go-between.

Fractions and ordinal numbers are abbreviated differently. The fraction un cinquième can only be abbreviated 1/5, whereas the ordinal cinquième is shortened to 5e. 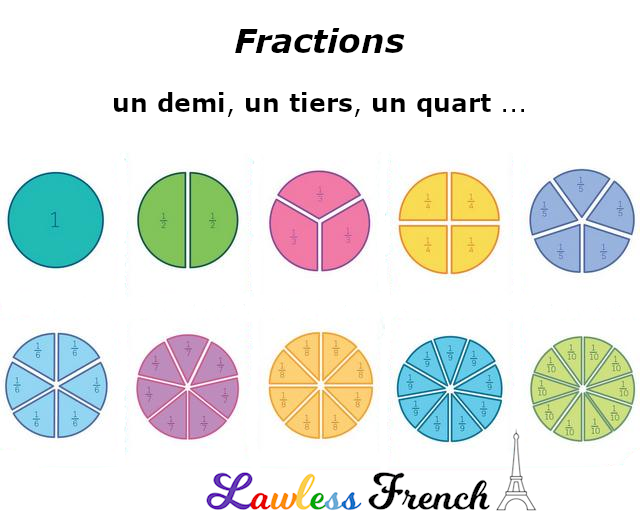