Auxiliary verbs are also known as helping verbs, because they help form compound conjugations, meaning compound tenses like the passé composé as well as compound moods like the past subjunctive.

The key thing to remember about compound conjugations is that there are two verbs: the auxiliary verb, which conjugates for the required tense or mood, and the main verb, which is always in the form of the past participle.

Since most French verbs take avoir, it makes sense to memorize the relatively short list of the ones that don’t. Verbs that require être as the auxiliary can be divided into two groups:

2. Intransitive verbs of movement – when the following verbs are used intransitively*, they require être as their auxiliary:

* Intransitively = without a direct object. Most of these verbs can only be intransitive, so they always require être as the auxiliary. But eight of them can be used transitively, and when that happens, they need avoir.

With practice, you’ll get used to these verbs and know instinctively that they require être, but for right now, you might find one of these mnemonic devices helpful.

Native French-speaking teachers teach être verbs by having students draw a house with a door, windows, at least two rooms, and a staircase, and then label it with the être verbs. For example, draw a figure passing in front of the house (passer), another entering it (entrer), and a third going upstairs (monter).

DR & MRS VANDERTRAMP seems to be the standard mnemonic device for être verbs in the United States. I don’t like it – I think including the derivatives is silly, but whatever works for any given student is all that matters.

Also note that passer is missing.

Each letter in ADVENT stands for one of the verbs and its opposite, and then there’s one extra verb.

Once again, passer is missing.

Each letter stands for one of the 13 verbs. As always, passer is missing.

Think you’ve got it? Test yourself on French auxiliary verbs with these fill-in-the-blank exercises: 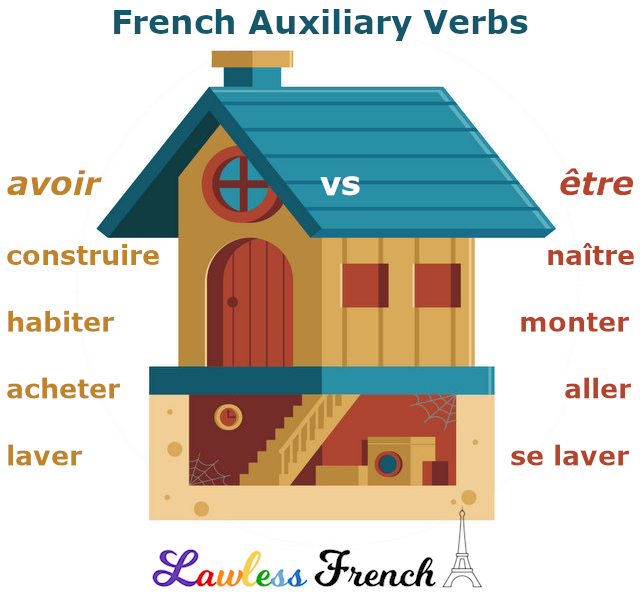