There’s no such thing as modal verbs in French, so translating them from English requires a bit of creative thinking. Usually you need a normal (conjugable) French verb in a particular tense or mood, but as you’ll see for 3 and 4, you can sometimes use just an adverb.

So what is a modal verb? Also known as a "modal auxiliary" or simply a "modal," it’s a verb that has no conjugation—it’s the same for all grammatical persons—and expresses the mood of the verb that follows it. Nine of the ten English modal verbs are followed directly by the second verb, with no "to" in between.

Can meaning "to be capable of" is equivalent to pouvoir in the present tense.

Can meaning "to know how to" equals savoir.

Could with a present or future meaning equals pouvoir in the conditional mood.

Could in the past equals pouvoir in the imperfect.

May and might meaning "it’s possible" = peut-être, pouvoir (present or conditional), or il se peut + subjunctive.

May in a request is either pouvoir in the present or vous permettez que plus the subjunctive.

Must can be translated by the present tense of devoir or falloir.

Shall and will plus a verb are both equivalent to the French future tense.

Should and ought to are both equivalent to devoir in the conditional.

Would with a present or future meaning equals the French conditional mood.

Would in the past equals the imperfect. 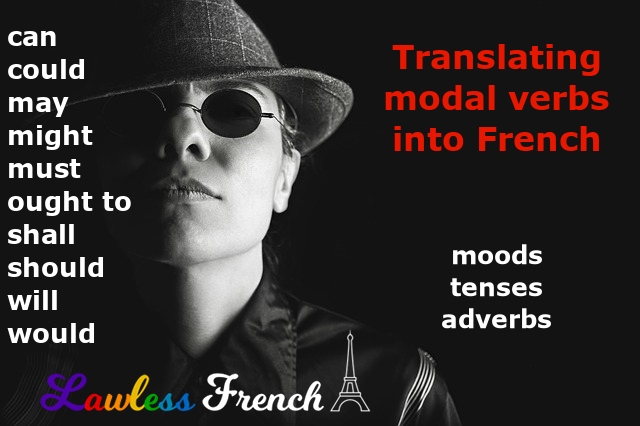