Superlative adverbs are used to profess absolute superiority or inferiority among two or more things. This superlative lesson will help you be the best at using them.

There are two types of superlatives:

1) Superiority indicates that something is "the ___est" (the biggest, the fastest, the stupidest) or "the most ___" (the most purple, the most tired, the most important). The French equivalent is le plus ___. Note that "superiority" doesn’t necessarily mean superior in the sense of the best, but rather just the most.

2) Inferiority indicates that something is "the least ___" (the least hungry, the least exciting, the least boring). The French equivalent is le moins ___. Again, "inferiority" doesn’t necessarily mean it’s bad.

The grammar involved in using superlative adverbs varies slightly depending on whether you’re comparing adjectives, adverbs, nouns, or verbs.

To make comparisons with adjectives, just put le plus or le moins in front of the adjective. The superlative word itself is invariable, but, as always, the definite article and adjective have to agree with their noun in gender and number.

Note that the definite article is required with the superlative even when there’s already an article in front of the noun. Otherwise, you’d be using the comparative.

In the above examples, the comparison is implied – there’s some antecedent that these superlatives are referring back to. When there is no antecedent, you need de after the adjective, followed by whatever you’re comparing to.

Or you can add a relative clause after the superlative.

* Why essayée instead of essayé? It’s direct object agreement.

When a clause follows the superlative, the subjunctive may be required.

These two constructions are equally correct; the only difference is that putting the superlative after the noun makes it a bit stronger, more emphatic.

The adjectives bon and mauvais have special superlative forms: le meilleur and le pire. More about this in a future lesson.

Comparing adverbs is much the same, but you don’t have to worry about agreement, since adverbs are invariable. As for placement, the superlative goes directly after the verb.

The adverb bien has a special superlative form: le mieux.

When comparing the quantity of nouns, superlative adverbs require the preposition de: 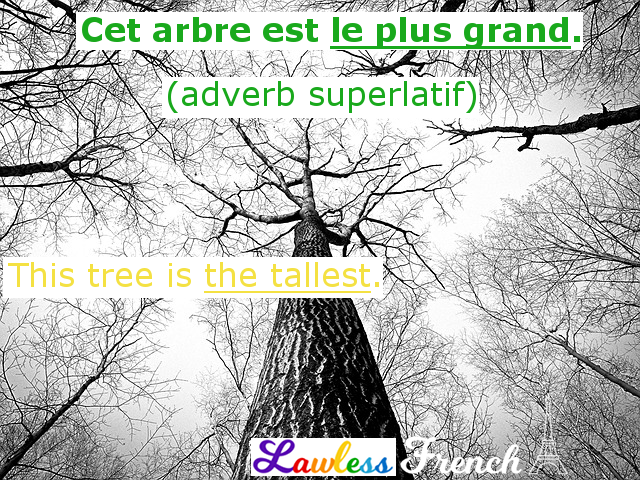