Comparative adverbs are used to compare the relative superiority or inferiority of two or more things. This superior lesson will keep you from getting an inferiority complex. 😉

There are three types of comparisons:

1) Superiority indicates that something is "___er" (bigger, faster, stronger) or "more ___" (more purple, more tired, more important). The French equivalent is plus ___.

3) Equality indicates that two or more things are "as ___" (as happy, as thirsty, as interesting). The French equivalents are aussi and autant.

The grammar involved in using comparative adverbs is slightly different depending on whether you’re comparing adjectives, adverbs, nouns, or verbs.

The simplest comparison is with adjectives: just put plus, moins, or aussi in front of the adjective. The comparative itself is invariable, but, as always, the adjective has to agree with its noun in gender and number.

a) Compare two nouns with one adjective

In the above examples, the comparison is implied – there’s some antecedent that these comparatives are referring back to. When there is no antecedent, you need que after the adjective, followed by the other noun or pronoun you’re comparing to.

Note that in the final example, the stressed pronoun is required in French, whereas the subject pronoun is used in English.

b) Compare two adjectives in relation to one noun

c) Compare an adjective over time

The adjectives bon and mauvais have special comparative forms: meilleur and pire. More about this in a future lesson.

Comparing adverbs is much the same, but you don’t have to worry about agreement, since adverbs are invariable. Once again, there are three types of comparisons.

a) Compare two nouns with one adverb

b) Compare two adverbs in relation to one noun

c) Compare an adverb over time

The adverb bien has a special comparative form: mieux.

When comparing the quantity of nouns, the comparative adverbs are somewhat different:

a) Compare a noun between two subjects

b) Compare two (or more) nouns for one subject/verb

Note that de must be repeated in front of each noun being compared.

c) Compare a noun over time

When comparing verbs, the comparative adverbs are slightly different again:

a) Compare a verb between two subjects

Note the word order: the comparative adverb goes after the verb.

c) Compare a verb over time

You can add emphasis to a comparison with encore: 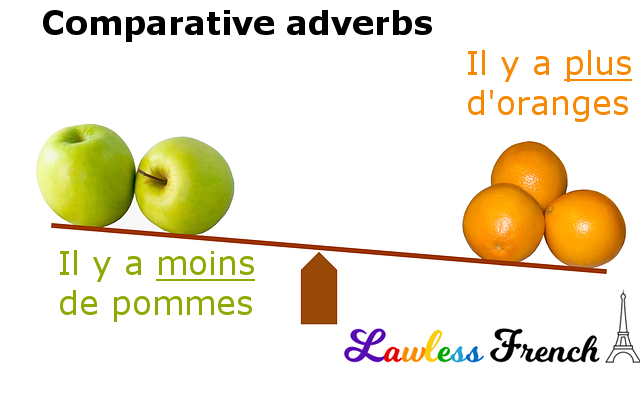