The French word plus has a number of different meanings, uses, and even pronunciations.

Plus can be pronounced in three different ways, depending on how it’s used and where it’s found in the sentence. This lesson shows the pronunciation for each usage with IPA:

Plus is the superior comparative adverb, equivalent to more ___ or ___-er. It’s usually pronounced [ply] or, when a liaison is necessary, [plyz].

1) When it’s the last word in a phrase, plus is pronounced [plys].

Le plus is the superior superlative adverb, equivalent to most ___ or ___-est. Like the comparative, the superlative plus is usually pronounced [ply], except for [plyz] in a liaison and [plys] at the end of a sentence.

In negative constructions, plus is always pronounced [ply].

1) The negative adverb ne … plus means "not any more."

Plus with a capital P

At the beginning of a sentence, plus can be especially tricky.

Plus de followed by a noun can be affirmative ("more") or negative ("no more"); your pronunciation makes all the difference. When plus means "more," it’s pronounce [plys],* and when it means "no more," it’s [ply].

The following expressions are all negative, so plus is pronounced [ply]. I’ve also include an example of what each phrase might be shortened from.

As a simple coordinating conjunction, plus means "plus, and, added to" and is always pronounced [plys].

When used in pairs, meaning "the more … the more," the pronunciation is [ply]

Rarely, un plus [plys] is a noun, meaning "a plus, asset, advantage": 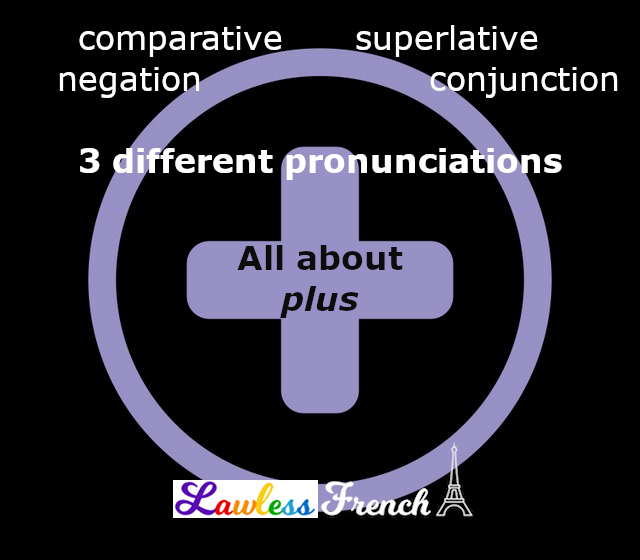