Adjectives comprise one of the eight French parts of speech, but certain members of other grammatical categories can sometimes be used as adjectives. These "non-adjectives" are invariable: there’s no gender/number agreement with the nouns they modify.

There are four types of non-adjective adjectives.

As far as I know, this is the complete list of French adverbs that can be used as adjectives:

Many nouns can be used as adjectives; here are just a few examples.

Like all of the above, noun clauses do not agree with the nouns they are "adjectiving" for*

* But there is agreement within the noun clause – note that in the second example, bonne is feminine to agree with its noun humeur. 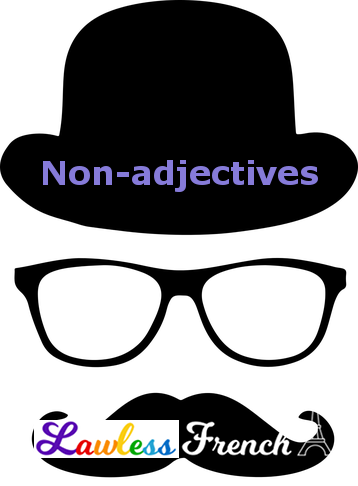