In both French and English, many adjectives can be used as nouns as a sort of shorthand to reference what you’d otherwise need an adjective + noun to refer to. This can be done with both singular and plural adjectives, but the grammar is a bit different.

When using an adjective that replaces or references a singular noun, the adjective needs either an antecedent …

Most adjectives that are used as nouns when referring to a group of people do not have an s in English, though they do in French.

* These adjectives can be used as both singular and plural nouns in English. For the rest, you must include the noun when you mean for it to be singular, e.g., the blind man, the elderly woman. Without the noun, it’s automatically plural: the blind [people], the elderly [people].

** In French, these words are actually nouns, not adjectives pretending to be nouns.

This is the exception to the above. Again, in French, these all have a plural marker, but English is trickier: some take an "s" while others don’t. Generally speaking, if it’s grammatically correct to use the noun without "the" in English (whether or not you actually use it), it takes an "s" in the plural.

Nationalities that end in -ch, -se, or -sh in English can’t be used as nouns without "the" and do not take an -s in the plural.***

*** In English, to talk about a single person belonging to one of these nationalities, you need to attach a noun or suffix: French man, Senegalese woman, Polish guy, Spaniard. 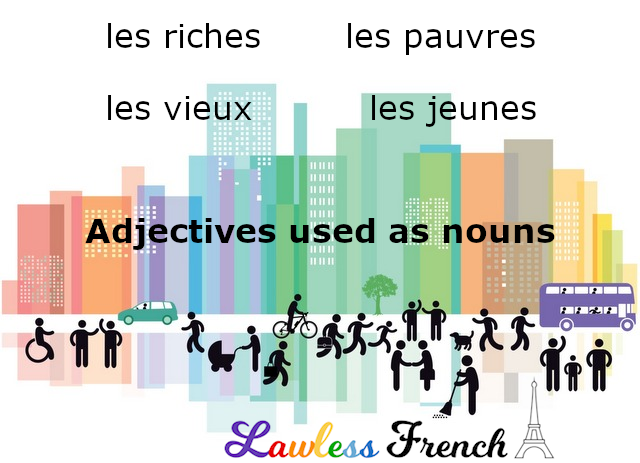