With regard to how they function in a sentence, verbs can be divided into three categories: action, state-of-being, and auxiliary.

Action verbs express what someone or something is doing, the action that they are performing. The vast majority of verbs (99%+) are action verbs, and they can be further divided into sub-categories:

Transitive verbs require a direct object, something that the subject of the verb is acting upon.

Intransitive verbs do not have a direct object.

Ambitransitive verbs are both of the above: they are verbs that can be either transitive or intransitive, depending on how they’re used.

The adjectives heureux and fatigué describe their respective subjects.

The noun that follows a state-of-being verb is not a direct object (something being acted upon, as is the case with transitive verbs, above), but is instead something called a "subject complement": a word that can, in essence, replace the subject because they are one and the same. In these examples, the nouns professeur and footballeur are equivalent to their subjects, je and Franck, respectively. I’m not "doing something" to a teacher, I am a teacher. The word "teacher" defines me. Likewise, Franck isn’t performing some action on a soccer player, he has the appearance of one.

Also known as helping verbs, auxiliary verbs are used in the creation of compound tenses and moods. They are placed in front of an action or state-of-being verb to offer additional information such as tense and possibility. 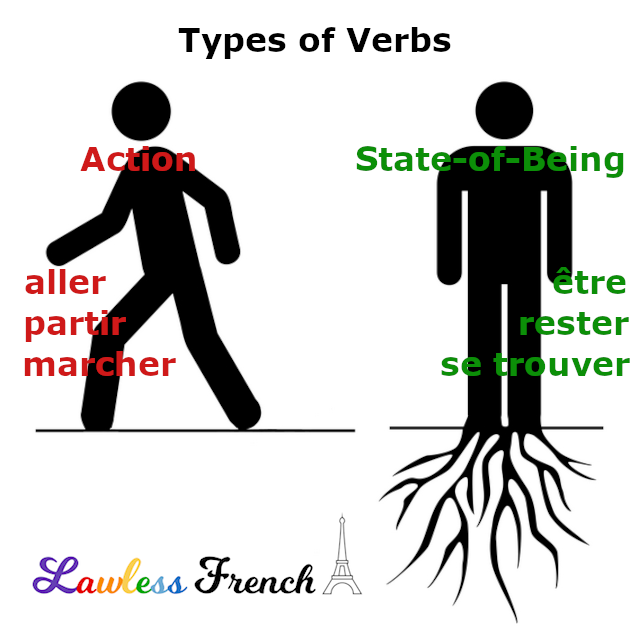