Usage notes: Le pass sanitaire, short for le passeport sanitaire, is a certificate with information about the bearer’s COVID vaccination status, test results, and previous infection (if any). This is a sheet of paper printed out by a medical professional or government official, which you then have the option to upload to the smartphone app TousAntiCovid. Either way, the QR code makes it easy to share your status with whichever business or governmental entity requests it, anywhere in the EU.

The pass sanitaire was superseded by the pass vaccinal on 24 January 2022.

Le pass sanitaire has been all the rage, literally and figuratively, since at least 12 July, when French President Emmanuel Macron announced that it would be required to access everyday businesses like cafés and restaurants, as well as cultural venues and mass transit.* I have no comment on the debate over whether this is necessary, legal, or ethical; you can find plenty of coverage about that in the news.

What intrigues me is the word "pass," which is an obvious anglicism without any obvious need for it. The French noun passe is just as easily understood, even though passe does not have the particular meaning of "something that gives authorization" ** – for that, you need un passe-partout. But it would have been easy enough to shorten that to passe, which also works as an apocope of passeport. Indeed, though the official name is pass sanitaire, a number of French news outlets say passe sanitaire.

The choice of gender is also interesting. Since both passe-partout and passeport are masculine, un pass makes sense grammatically. But un passe looks a bit odd, and the nominal meanings of passe that already exist are feminine, so une passe makes more sense visually – at least to me. 🙂

** At least not in France. Canadian French, in contrast, has the noun un passe for things like bus passes and membership cards.***

*** At least according to Le Petit Robert. A Montréalaise friend has assured me that everyone says une passe for this meaning as well, and this is officially confirmed by the site J’ai ma passe. 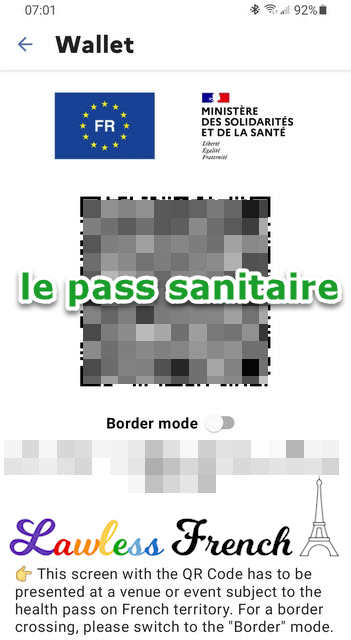