Usage notes: Voilà is the quintessential French word – commonly used in French, easy to say, and exotic sounding (and therefore used in English to give a bit of je ne sais quoi to whatever you’re saying).

Voilà is a contraction of vois là – literally, "see there"

Voilà has any number of meanings, it’s definitely one of those words that you pick up a feeling for when spending time with native speakers. In the meantime, here are lots of examples to help you understand the different uses.

The original meaning of voilà is "there is, there are" as a presentative, to point out one or more distant objects to another person. The nearby equivalent is voici (here is, here are), but in spoken French, voilà tends to be used in both cases, except when a distinction needs to be made (learn more):

Voilà can be used with direct object pronouns.

Voilà introduces an explanation when followed by

Voilà often expresses agreement with what was just said, meaning something like "that’s right" or "exactly."

You can used voilà as a filler at the end of a statement or explanation. The English equivalent is typically either much longer or else left out entirely.

Informally, voilà can replace il y a (ago) and depuis (for).

Lesson: depuis vs il y a

When a child ignores a warning and just what you knew would happen happens, et voilà is the response.

Examples of voilà in real-life videos from Lawless French Immersion:

The only correct French spelling is voilà, with a grave accent on the a. In English, both "voilà" and "voila" are acceptable. These are all wrong: 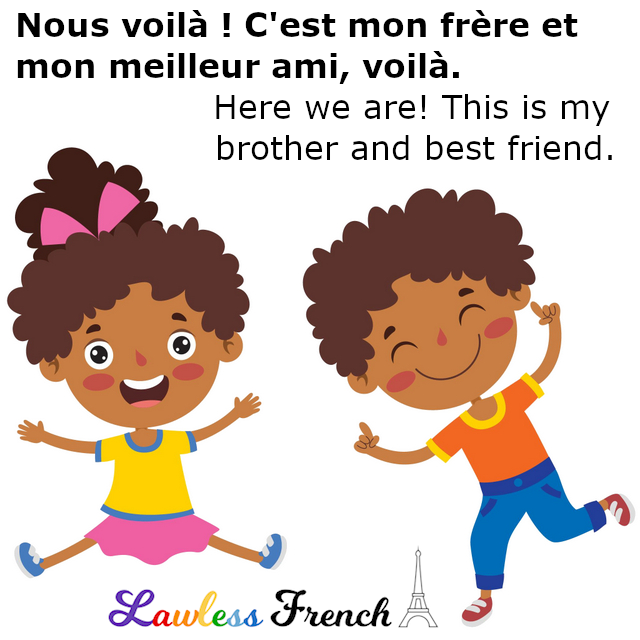