Though it was verboten during lockdown and may never completely recover in the post-COVID world, French kissing has always been a fascinating part of French culture. Not in the sense of kissing with tongues (a topic for another site!), but rather the ubiquitous exchange of cheek kisses upon meeting and greeting in France. Here’s what you need to know about it.

La bise and le bisou both mean "kiss": French family, friends, and some colleagues* exchange kisses on both cheeks upon meeting and leaving, as well as to congratulate or thank someone.** This most French of gestures may also be made by two people, especially kids and young adults, upon being introduced to each other by a mutual friend.

Whether to faire la bise depends on the relationship, gender, and to some extent age of the two people.

Two women who tutoient each other will always exchange bises, as will many who se vouvoient – using vous doesn’t necessarily indicate a distant relationship (see lesson on tu vs vous). If you’re not French and find yourself unsure about whether to faire la bise, let la Française decide.

One woman and one man who tutoient will usually faire la bise. If for some reason the woman is uncomfortable and chooses not to, she can make this clear by holding out her hand to be shaken instead (and by using vous, though again they may vouvoient each other but still kiss).

Between men, la bise is far less common. Family and very close friends do it, as do many teenagers. Adult acquaintances, new friends, tennis partners… probably not, even if they tutoient. As always, if you’re not sure, wait to see what le Français does.

No matter the reason, whenever two people don’t faire la bise as a greeting, they shake hands.

* Even while working. I can’t count how many times my transaction with an employee at a bank, post office, or grocery store has been interrupted by bises and a short conversation with their colleague arriving or leaving.

** On some occasions, you might exchange bises with the same person three times: upon arriving, to thank them for a gift or congratulate an achievement, and when leaving. 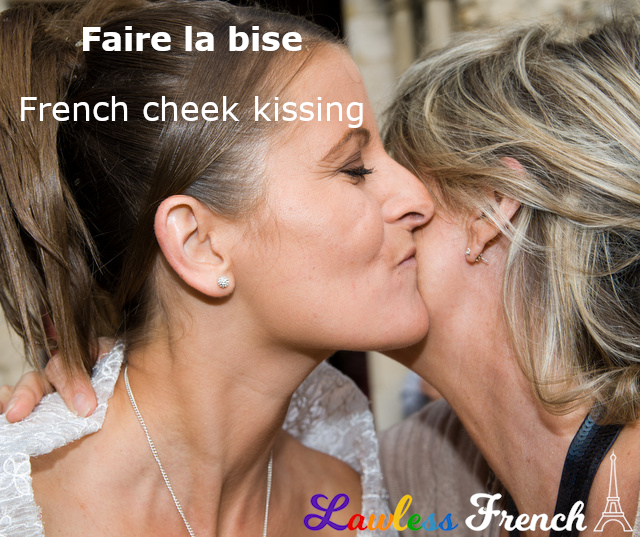