Do you know how to say "know" in French? There are two verbs with distinct meanings, and just to keep things interesting, there are also two overlapping meanings. Confused? After you read this lesson, you’ll know all you need to know.

Savoir is used when there’s another verb involved. When that verb is an infinitive, the English equivalent is "to know how to."

The word "how" is implicit in French and must not be translated; do not say Je sais comment faire du feu.

When the other verb is in a subordinate clause, savoir indicates knowledge of that fact or action.

The clause may be replaced by a pronoun or implied.

Connaître must be used with a direct object, which may be a person, place, or thing. While connaître can be translated by "to know," it may be helpful to think of it as "to be familiar with":

Two other meanings of "to know" can be translated by either verb.

1) To know a bit of information

2) To know by heart, to have something memorized

Savoir vs Connaître in the passé composé

Both verbs have different meanings in the passé composé.

Savoir = to learn, to find out:

Another good verb to know is the faux ami ignorer, which doesn’t mean "to ignore," but rather "to not know." It can be used with a clause or a direct object. 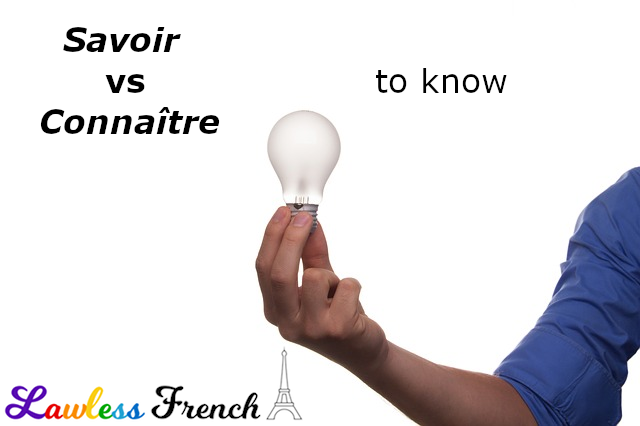