In verb tables, the subject is conveniently placed right in front of the verb, as in Je parle français (I speak French), which makes figuring out the correct conjugation very straightforward. But it doesn’t take long to discover that other words sometimes come between them.

In most cases, this intruder doesn’t cause any conjugation problems – le and ne don’t resemble subject pronouns, so there’s no reason they should cause confusion. But with some words, it’s a little more complicated.

The relative pronoun qui can be placed between the subject and its verb, and it’s not uncommon for students to conjugate the verb in the third person singular in order to agree with qui. But qui is not the subject in these constructions: the subject is the noun or pronoun that qui follows and replaces.

Note how the subject can be emphasized by putting c’est or ce sont in front of it – this is called the tonic accent.

The modifying phrase d’entre can be followed by a stressed pronoun, giving the impression that the verb should be conjugated for the latter. Once again, this is incorrect: the verb has to match whatever precedes d’entre.

Direct and indirect object pronouns go in front of the verb, and usually this isn’t a problem.

However, when the object is nous or vous, a careless mistake sometimes occurs. Because the subject and object pronouns are identical, it’s not uncommon for a sort of automatic instinct to take over, recalling the formulas

that are drilled into your head when you memorize verb tables. In short, because the object pronoun directly precedes the verb, you may automatically conjugate for it, rather than for the more distant subject. This mainly happens when speaking, and it’s just something to make a bit of extra effort to avoid. 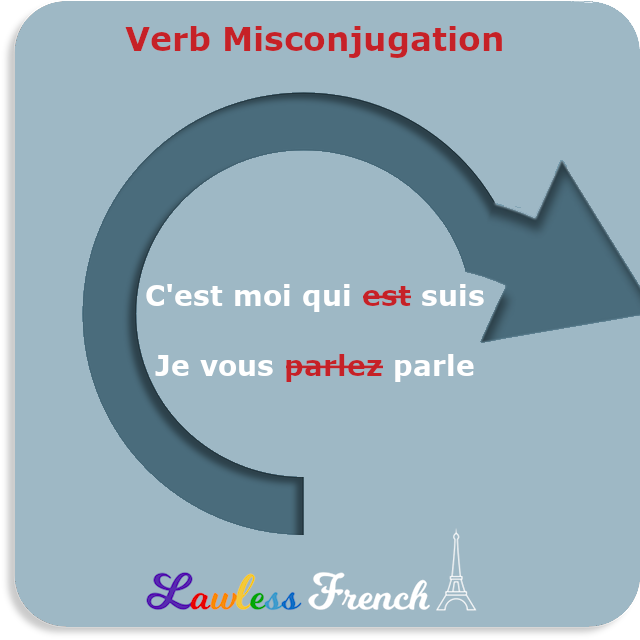