Usage notes: Many Americans have this idea that the French expression voulez-vous coucher avec moi ce soir ? is a great pick-up line. Others don’t know what it means, yet think it’s a cool thing to say to prove that they know a bit of French. They’re all wrong, for two reasons.

1. Inversion and vous are both very formal, which doesn’t make sense in the context of trying to pick someone up*—unless you’re talking to more than one person. 😮 So if anything, the question should be Tu as envie de coucher avec moi ce soir ? However …

2. The French don’t often use pick-up lines, and when they do, they’re not in-your-face direct like this one – see French pick-up lines.

So the bottom line is that yes, the grammar is correct, but no, you should never say this.

* Someone once explained the reason for the unusual formality to me: In the song Lady Marmalade, which is essentially where this expression came from, it’s not a pick-up line spoken by a man to a woman, but rather a business proposition from a woman to a man. Also, it takes place in New Orleans, and Acadiens (like Quebecois) prefer inversion even in informal settings.

Have you ever heard – or used – voulez-vous coucher avec moi ce soir other than in Lady Marmalade? Share your stories below! 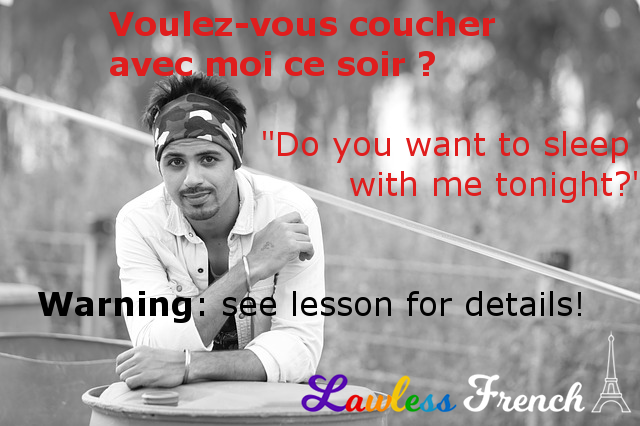