Gender-neutral pronouns, aka inclusive pronouns,* are used to avoid sorting individuals into the binary world of male vs female. Gender-neutral language is evolving in French** and is not considered standard, but is becoming more common, especially on the internet, so it’s important to be able to recognize the most common terms.

Probably the most important aspect of inclusive language has to do with personal pronouns, particularly subject pronouns and stressed pronouns. A neutral pronoun may be used for

In addition, plural neutral pronouns may be used to avoid referring to a group of mixed gender people with the default masculine plural (ils / eux), as required in standard French grammar.

What are your pronouns?

There is a growing tendency on social media and when meeting people in informal situations to ask "What are your pronouns?" or "Which pronouns do you use?" The French equivalents are

The answer to this question will always include a subject pronoun and stressed pronoun.

Please note that this lesson is about neutral language rather than grammar per se, so there are no explanations about how to use each type of pronoun. Click any link for a detailed grammar lesson with examples.

The standard subject pronouns are:

By far the most common neutral French subject pronoun is iel which may also be spelled yel or ielle. The plural is iels (yels, ielles).

Because iel was created by combining the binary pronouns il and elle, some people prefer other pronouns, such as

The standard direct object pronouns are:

There are several different neutral French object pronouns and, unlike for the subject pronoun iel, there does not seem to be a clear preference for any one of these over the others.

The plural les and the elision l’ remain the same.

The standard stressed pronouns are:

* Though the terms are related and often used interchangeably, there is a difference between gender neutral and inclusive:

** And in English, though the use of the singular "they" has been in use since 1375, far longer than the French equivalents: A brief history of singular ‘they’

I consulted a number of different online sources when writing this lesson. Any omissions are unintentional and any mistakes my own. Please let me know so I can keep this page up to date and accurate.

Guide de grammaire neutre et inclusive – This PDF is particularly useful, as it goes into detail about other types of gendered pronouns (possessive, demonstrative) and beyond: articles, noun and adjective endings, and titles. I don’t know how official the guide is, but clearly a great deal of thought and effort has gone into it.

Petit dico de français neutre/inclusif – Based on the author’s 2017 survey of language in the non-binary community.

Pronoms épicènes néologiques – An attempt to gather consensus on inclusive pronouns in order to incorporate them into the online dictionary and grammar Grammalecte.

Usage d’un langage neutre du point de vue du genre – PDF about the European Parliament’s efforts to use neutral language in official communications, and encourage other organizations to do the same. 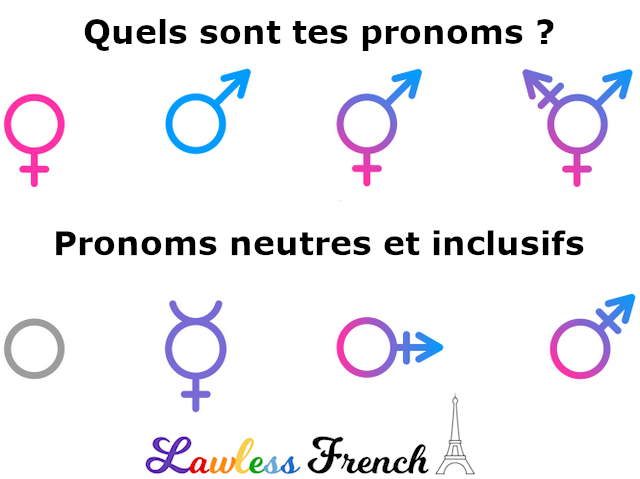