Learning a foreign language does more than just make it possible to order coffee or beer in another country – although that part is definitely great! While learning a new language can be difficult, it’s also fascinating and offers many benefits and advantages even to armchair travelers.

First and foremost – and obviously! – learning another language allows you to speak to more people while traveling, and maybe also at home, if you live in a linguistically diverse town.

Even if the people you meet speak English,* if it’s not their native language they are at a disadvantage, limited to using the vocabulary and references that they’ve learned. Why not turn things around and see what that’s like? Sure, it can be challenging, but it also shows that you are interested in more than just local monuments. In all my travels, the best experiences I’ve had occurred when I was speaking the local language, or at least when I used as much as I could at the beginning of the interaction. Almost every person I’ve ever met has been happy to speak to me in their language – at least until I ran out of Greek or Italian or whatever and had to revert to English.

* Despite what many believe, English is not universally spoken – not even close. In reality, about 14% of the world’s population speaks English, some 1.1 billion people. Of that, fewer than a third (about 378 million) speak English as a native language, the rest as a foreign language.(1, 2) So if your only reason for not learning another language is "everyone speaks English, so why should I bother?" you’ll need to find another excuse.  🙂

And while we’re at it, let’s take a look at another myth, the one that insists you’re better off not "butchering" someone else’s language. Apart from strict teachers, very few people care if you make mistakes while speaking. The purpose of language is communication, not showing off a perfect mastery of grammar rules and flawless pronunciation. Besides, even native speakers make mistakes. If mistakes weren’t allowed, human communication would be severely curtailed. Far more important than perfect language skills are communication and human connection.

Beyond understanding what people are saying, learning another language helps you understand the people themselves: the cultures, traditions, and beliefs of speakers of that language. Natural languages** are just that: they have naturally evolved and grown over the hundreds or thousands of years that they’ve been spoken. Sometimes they’re helped along by organizations like the Académie française, but for the most part, natural languages are shaped by the people who speak them. So it makes sense that the language reflects the culture(s) and vice versa. Therefore, new languages open your mind to the culture(s) that speak them, giving you insight not only into the people, but also their traditions, values, and ways of looking at the world.

My favorite example of this is the word "you." In most dialects of Modern English, we just have one word, no matter the gender, number, or formality of the people we’re talking to. In comparison, French and Greek have two words for you: a singular and familiar form and a plural and/or formal form. Italian has four words: singular/familiar, singular/formal, plural/familiar, and plural/formal. Spanish is similar to Italian but has an additional plural/familiar pronoun to distinguish between masculine and feminine. Arabic, meanwhile, has three pronouns: it does not distinguish familiar from formal, so has just one plural pronoun, but – in contrast to all of the above – has separate forms for masculine and feminine singular. These different ways of distinguishing between the person or persons we talk to give insight into the mindsets of these cultures and their relationships with other people.

Besides that, translation is a imperfect art. Translators can create incredible works of literature and movies in the target language, but it’s often impossible for the translation to be 100% faithful to the original: it’s very common for things to be lost and/or gained when the language changes. If you really want to know what the creator meant and the feelings s/he hoped to invoke, you need to read/watch/listen to him or her in the original language.

** As opposed to invented languages like Esperanto and Klingon.

Let’s face it – standardized tests have their problems. But like it or not, they’re an important part of our education, and study after study shows that foreign language study increases test scores on a variety of subjects.

The world continues to shrink, bringing people from the four corners of the multilingual world together for business and trade. Speaking more than one language is essential for many companies and organizations. Not only will another language give you an edge over an otherwise identical competitor, it might even make up for detractors like lack of experience or less-than-stellar test scores. While many companies default to using English in international communications, it’s always better to use the client’s language whenever possible.

Even if you’re not interested in linguistics per se, studying another language can offer insight into your own, making you a better speaker and writer even in your native language. Other languages have had tremendous influence on English, so your vocabulary in particular can be greatly enhanced when you learn languages such as French, German, and Greek.

And if you get bitten by the language learning bug, you’re in luck, because each time you study another language, you improve your knowlege not only of that language, but also of how to learn a language. Upshot: each successive language will be a little easier – especially if the languages are part of the same family.

Learning another language has a variety of personal and professional benefits – don’t miss out on yours. Bon apprentissage !  🙂 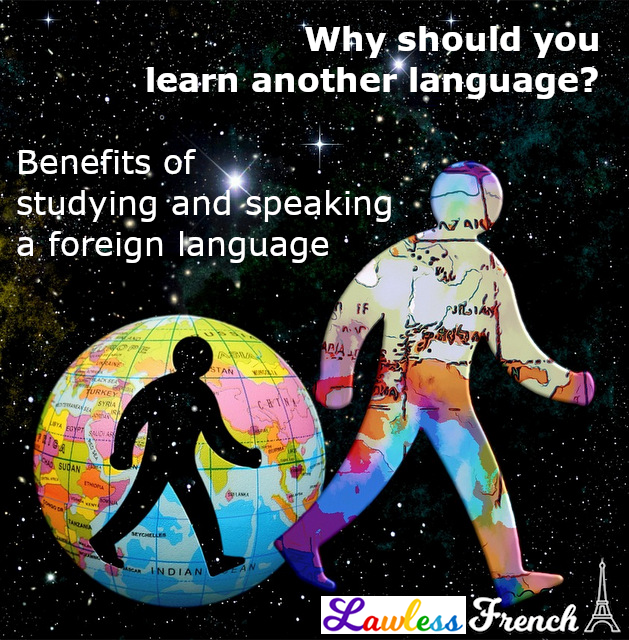