Though it’s named for the roughly hexagonally shaped country that we all know and love in Western Europe, the French language extends far beyond the borders of France, in myriad and frankly confusing ways. This page covers the basics but I think the full story could easily become a dissertation.

* France itself isn’t limited to Europe either – it also includes a dozen overseas departments and territories (les DOM-TOM). See the list at the end of 7 Names for France.

Specific regions in some multilingual countries are more francophone than others:

French is also found in certain areas of otherwise non-francophone countries, sometimes with an official status:

Another 50+ countries are connected to France and therefore French historically, and use the language for specific domains (e.g., administration, commerce, law), have significant French-speaking populations, and/or promote the French language to their citizens. Most are therefore members or observers of la Francophonie:

** Not a member of La Francophonie. This is particularly noteworthy for Algeria, which is second only to France in the number of native French speakers.

Many Caribbean islands use a variety of Antillean Creole French as a lingua franca. These dialects have varying amounts of French and English influence but are, in general, mutually comprehensible. This includes French islands (Guadeloupe, Martinique) as well as some English-speaking islands:

Antillean Creole is also related to and mutually intelligible with Haitian Creole. 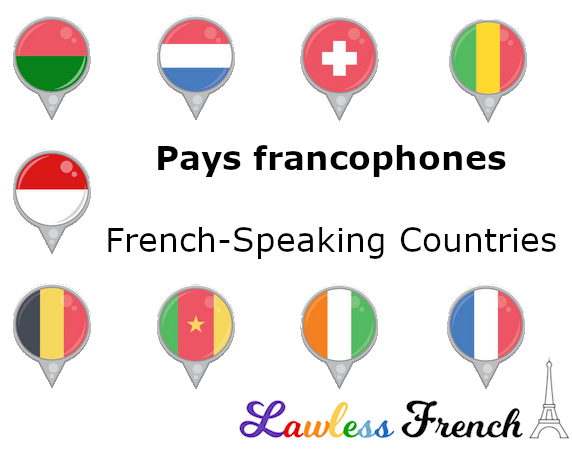