French is a Romance language (learn more), but it has a number of characteristics that set it apart from the other members of its linguistic family. Here is an extremely simplified synopsis of its development:

There has always been an important linguistic difference between the north and south of France. In 120 B.C. in the southeast of France (known as Gaul at the time), the Romans founded a province and all but replaced the extant Ligurians’ language with Vulgar Latin.* In contrast, the Gaulish (essentially several Celtic dialects) spoken in the north didn’t take a backseat to Latin until 58 B.C., when Julius Caesar conquered the north of Gaul. Thus Latin had some 60 years more influence on the south than the north. A further distinction between north and south was caused by the German Frankish invasion in the 400s A.D., which contributed some grammar, pronunciation, and vocabulary (including the terms “France” and “French”), as these influences were concentrated in the north.

* It is essential to understand that it was Vulgar Latin (common or spoken Latin), rather than classical Latin, from which the French language evolved.

This linguistic and cultural split eventually led to the emergence of three dialectal regions:

The first two dialectal regions are named for the way “yes” was said: oïl in the north and oc in the south. Franco-provençal was a sort of intermediary, with various linguistic traits from the north and others from the south. Eventually, these three regions broke down into dozens of regional dialects, such as Parisian French, Picard, and Limousin. The political importance of the Parisian region eventually led to langue d’oïl in general and the French spoken in and around Paris in particular becoming the dominant dialect. However, there are still some 70 spoken dialects spoken in France today. (In addition, several distinct languages are spoken in certain regions, particularly along the border: Basque, Breton, Alsatian, Provençal, etc.)

In the 9th century, Charlemagne attempted to revive interest in and knowledge of Latin with a series of efforts known as la renaissance carolingienne. What he found was that the average person wasn’t even speaking Latin – the common language at this time had already evolved into what we call today Old French. In 842, the first French text, les Serments de Strasbourg, was written.

Old French gave way to Middle French in the 14th century, and in 1539 François I proclaimed the Ordonnance de Villers-Cotterêts, which replaced Latin with French as the official administrative and judiciary language of France.

From Classical to Modern French

By the 17th century, French, although still evolving, had matured into a language as dignified as Latin. Writers and grammarians worked to make the language consistent and comprehensible. 1606 saw the publication of the first French dictionary, Thresor de la langue francoyse, tant ancienne que moderne by Aimar de Ranconnet and Jean Nicot. Cardinal Richelieu founded l’Académie française in 1635, and the first Dictionnaire de l’Académie was published 59 years later.

Since then, French has continued to grow and evolve. Immigrants from North Africa have contributed numerous words to French, and of course extensive borrowings from English have led to a mix of French and English, particularly among teenagers, known as franglais. 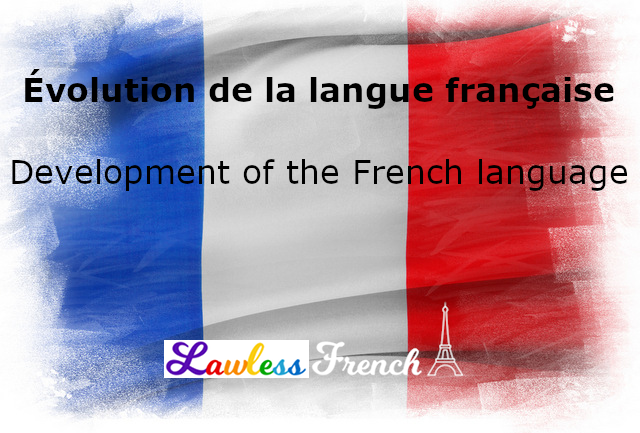