Pronoun usage and pronunciation varies greatly between formal and informal French. Much of what you learn at school is formal and doesn’t reflect how French is actually spoken. If you want to sound more French in informal situations—not to mention understand what you hear—you need to be aware of these pronoun differences.

The biggest differences have to do with subject pronouns.

You’re already familiar with tu, which is reserved for friends, colleagues, and kids, and affects everything from verb conjugations to certain types of adjectives. (See tu vs vous for detailed info.) Normally, tu does not contract, but informally it does in front of vowels.

A note about contractions

As the name of this lesson says, this is about informal pronouns. The written forms are provided to help you understand how these contractions are pronounced, but they are not acceptable written forms – unless you’re actually writing an informal dialog.

The indefinite pronoun on, which means things like "one, people, they," is an all-but-required informal replacement for nous. (A 20-something who knew I wanted to improve my French always corrected me when I said nous because it was too formal for our friendly chats.)

The l in il and ils is silent and the resulting sound is written y or i.

a) If the contraction qu’y / qu’i results, it may be written qui, not to be confused with the pronoun qui.

b) Il faut may become y faut, i faut or simply faut.

c) Il is dropped entirely in the expression il y a.

Note: when preceded by si, the l in il and ils must be pronounced, since s’i / s’y would sound identical to si.

An extra subject pronoun is sometimes added after the subject.

In direct speech, a meaningless relative pronoun que is added in front of the subject/verb, to avoid the incidental clause inversion that would otherwise be required.

If que is followed by il or ils, the two words contract and may be written qu’y, qu’i, or even qui (like 4a, above).

Like il, the indirect object pronoun lui reduces to y in direct speech.

The indefinite demonstrative pronouns ceci and cela are both replaced by ça.

When verbs like communiquer, dire, donner, porter, and remettre are used with third person direct objects and indirect objects together, the former is often dropped. 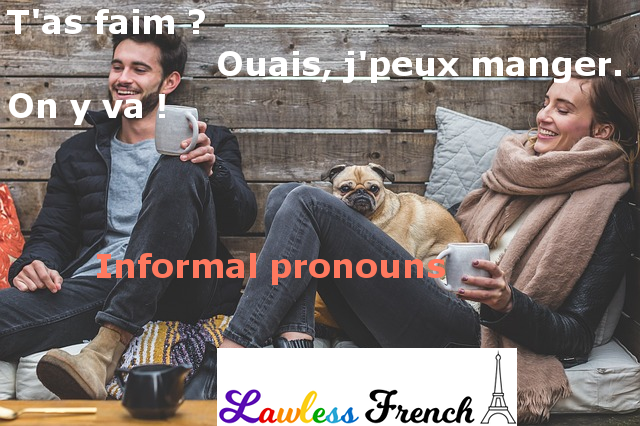