What year is it?

While this may seem like a simple question, it’s kind of complicated in French. In addition to two different words for "year," French has two different ways to pronounce certain years.

What year, In what year, When …

Asking when (what year) something happened or will happen requires en quelle année.

But to talk about the year something began or was created, you need de quelle année:

There are two ways to answer the above questions. The easy way is with just the year itself preceded by the appropriate preposition (if any):

However, if you want to include the word "year" when answering en quelle année questions, the actual number of the year dictates whether you need to use an or année.

2) All other numbers are used with l’année:

How to Pronounce and Write Years

The vast majority of years – everything up to and including the year 1099, and everything from 2000 and later – are pronounced like normal numbers:

1) These years can be pronounced like normal numbers, as above:

** The French equivalent of "thousand" can be spelled mille or mil, but the latter is somewhat archaic. The closer the year is to the modern day, the more likely it is to be spelled mille.

2) Or they can be stated with the centaines vigésimales (aka centaines vicésimales) counting system, with the year broken into pairs of two-digit numbers, separated or followed by the word cent(s).***

As in English, years in French can be differentiated with one of two common notation systems. 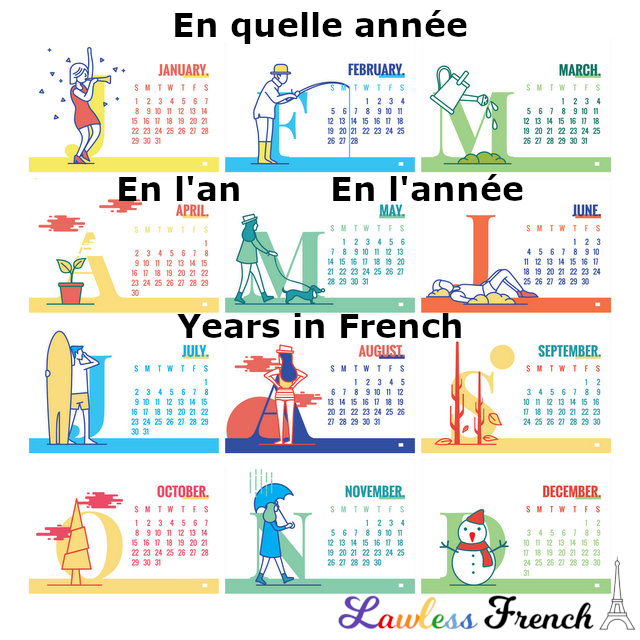