Usage notes: Five pm is the stereotypical quitting time, when the workday is finally over and employees can head out. In many cultures, they go home, or to the gym, or maybe meet some friends at their favorite bar for happy hour. (Incidentally, this custom has been imported to France, where it’s usually called ‘appy hour, though the official translation is heure du cocktail or heure de l’apéritif.)

But the more traditional French after work pasttime is le cinq à sept: a two-hour window, from 5pm to 7pm, during which lovers meet up for a tryst before going home to their families. It’s hard to say when le 5 à 7 originated, but it has definitely existed since 1967, when Françoise Sagan wrote about it in her novel La Chamade.

It’s also hard to say whether it’s still going on. When my husband asked his students, a total of about 100 French men and women ranging in age from around 40 to 80, all but one said they knew of le cinq à sept. He was unable to determine whether they actually took part in it, but got the impression that they didn’t – indeed, that it is or was reserved to a certain social class. The youngest student said she’d never heard of it, but then added

In Québec, le cinq à sept means something else entirely; in fact, it’s a lot like happy hour, but without the discounted drinks: some friends meeting for a cocktail or coffee after work or before going on to some other activity. Other possible translations: afternoon get-together, rendez-vous. 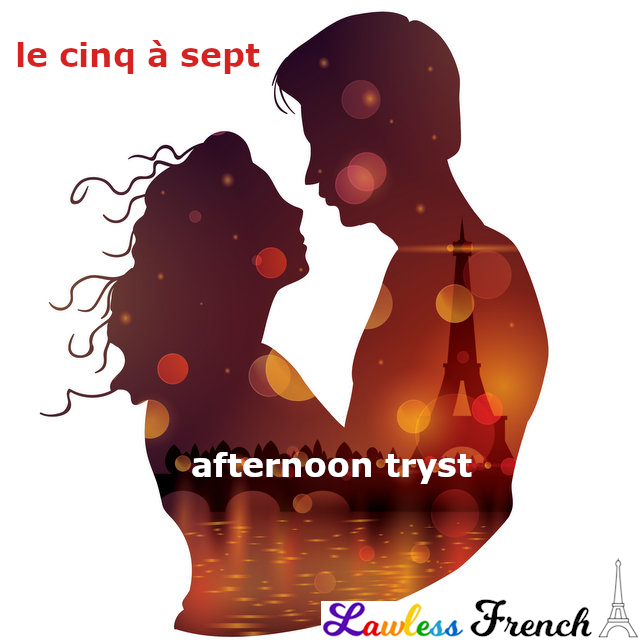