If you learned French in a classroom, odds are that you overuse certain French verbs, because you were taught a somewhat generic word but not the sometimes subtle distinctions between it and its synonym. Here are 5 French verbs that are useful but often overused.

Conduire means “to drive,” but only transitively (with a direct object), as in

When talking about driving intransitively, the verb you need is rouler:

Écrire refers to the physical act of writing:

A more elegant verb that references the creative process rather than the physical act of writing is rédiger. While it is commonly translated by “to write,” rédiger is more like “to compose”:

Nager simply means “to swim” and hints at a serious sort of activity, such as swimming laps:

Se baigner is less straightforward; it’s more like “to play in the water” and is much more commonly used:

Paraître literally means “to appear.” Impersonally, however, it is used far more than sembler to mean “it seems”:

When referring to someone or something that is coming (arriving) right now, the verb arriver is more idiomatic:

On a somewhat related note…

These verbs are different from the above, as the overuse of être is an actual mistake, as opposed to a difference in style or nuance.

Être of course means “to be.”

But there are a number of English expressions with “to be” that can only be translated into French with the verb avoir:

And others that need faire: 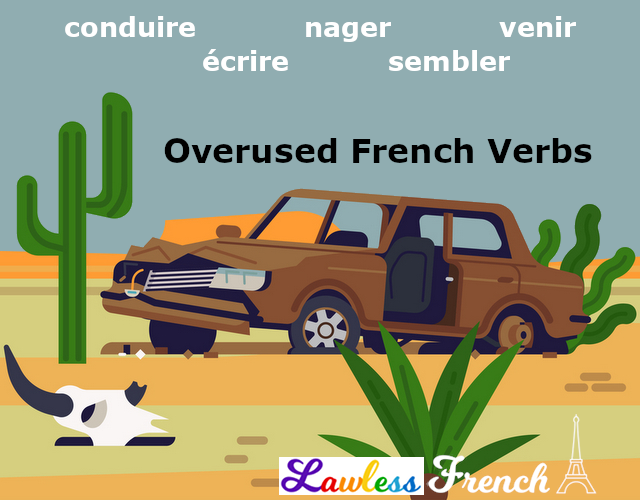