The rhythm of French is what makes it such a beautiful language. Thanks to liaisons and enchaînement, French words flow one into the next, and there is no stress on any particular syllable within each word. All of this combines to give French a certain musicality that sets it apart from other languages.

While it doesn’t stress one syllable in each word like English, Italian, Spanish, Greek, and many other languages do, French does have its own kind of stress which is based on rhythmic groups.* Each group has up to seven syllables which form a unit of meaning.

There are essentially three types of rhythmic groups:

Since the words in each group are syntactically related, liaisons are usually required within each group. On the other hand, they are often forbidden between one group and the next.

This is where French’s unique style of word stress comes into play, as each rhythmic group requires two different kinds of stress in the final syllable:

Intonation is the rising and falling of a voice, the pitch that can help distinguish one syllable from the next as well as a statement from a question. In French, all syllables are pronounced at the same pitch, except for the final syllable in each rhythmic group, which is pronounced at a different pitch.

+ Here’s a visual of the intonation of French questions, in which the final syllable is pronounced at a higher pitch:

+ In statements and commands, the final syllable in the final rhythmic group is pronounced at a lower pitch.

The tonic accent (l’accent tonique or l’accent d’intensité) is also pronounced in the final syllable of each rhythmic group and consists of a bit of emphasis added to those sounds, making them slightly stronger and longer. This is much like the word stress required in English and Spanish, but it’s not nearly as pronounced in French.

Rhythmic groups are not set in stone, and short ones may be combined, especially when speaking quickly. For example, some people might pronounce Nous parlons d’un film as a single group, even though technically it’s two: Nous parlons | d’un film.

Click to hear some examples of rhythmic groups, with slightly exaggerated intonation, tonic accent, and pauses between the groups. 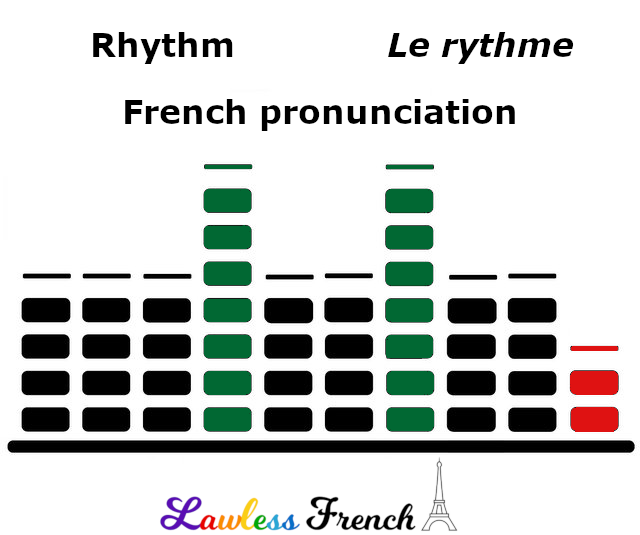