There’s a bit of debate with regard to accents on capital letters. Most everyone agrees that accents are required on lower case letters, but some French speakers claim that they are unneccessary or even incorrect on capital letters. Is this true? The answer depends in part on who you ask.

First things first: accents are definitely required on lower case letters. As I’ve said before, leaving off a French accent is an outright spelling mistake just as serious as adding, changing, or omitting a letter, and for me, this is true regardless of upper or lower case. Many prestigious organizations agree.*

But some writers claim that rule only applies to lower case letters. For them, when these same letters are capitalized, accent omission suddenly becomes acceptable – or even desirable. Why?

Regardless of whose side you’re on (pick me! pick me!), there are two kinds of words that really want to be accented.

Never heard this word? That’s not surprising, since I coined it. 🙂 It refers to two or more words that are distinguish by the presence, lack, or type of accents.

Are the T-shirts really that special? Or does it just mean that they’re screen-printed? If it’s the latter, spell it out with an accent:

Is this a club for fishermen or sinners? Make it clear with accents:

See my list of accentonyms for the many word pairs to watch out for, and Le Projet Voltaire for additional examples.

When writing out the name of a person, company, or organization, correct spelling is of utmost importance – and that means including any required accents, even on capital letters.

* A few notables that I can’t imagine disagreeing with: 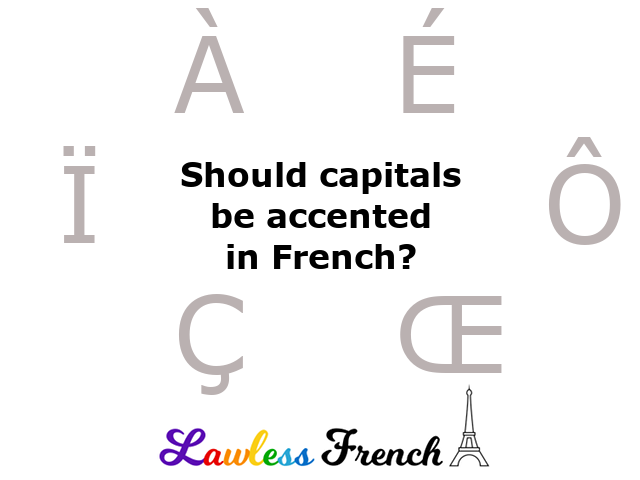